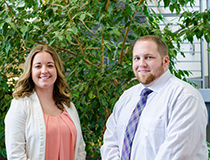 The opportunity to recognize students for their achievements is the most favorite part of my job. This year two of our students have been recognized for their academic excellence on the state and national level.

In December, Chantelle Hickman and Jonathan Neptune were nominated to be part of the All-State Community College Academic Team. They are representing CGCC on the state level. Each received a $250 scholarship. The recognition ceremony will be held in April at the capital. They will have an opportunity to have their photo taken with Governor Kate Brown. All State Community College Academic Team members receive special recognition at this ceremony, including medallions and certificates.

Two weeks ago we received news that both Jonathan and Chantelle are being recognized on the national level. Chantelle has been named a 2017 Coca-Cola Community College Academic Team Silver Scholar.  Jonathan Neptune, has been named a 2017 Community College Academic Team Bronze Scholar. The Coca-Cola Scholars Foundation sponsors the Coca-Cola Community College Academic Team program by recognizing 50 Gold, 50 Silver and 50 Bronze Scholars, and providing nearly $200,000 in scholarships annually. There were over 1,800 applicants from around the nation. Each Silver Scholar receives a $1,250 scholarship and a special medallion.  Each Bronze Scholar receives a $1,000 scholarship and a special medallion. Each will receive local, state and national recognition at Phi Theta Kappa’s annual convention, being held April 6-8, in Nashville, TN. They will be announced during one of the general sessions and walk across the stage in front of about 5000 people. Chantelle and Jonathan have been invited to a special meeting with donors from the Coca-Cola Foundation as well.

Chantelle and Jonathan strive for academic excellence and being involved on campus and in the community. They both serve as student leaders at CGCC and do an amazing job welcoming our new students. Congratulations to both of these students for representing CGCC.