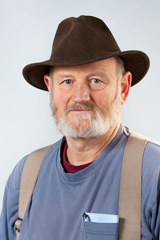 While in Great Britain, he met Bernard Leach and fired with Michael Cardew in his famous wood-fired kiln. During his travels, P.K. has worked with all the great potters of the "American Revolution in Clay."

Upon returning to America he taught, conducted hundreds of pottery workshops, has held numerous exhibits at museums, colleges, and galleries throughout the U.S. Currently, P.K. resides near The Dalles with his wife Evelyn and daughter Pearl. After building his studio and kilns on Mill Creek, he began concentrating on raku and wood-fired salt. Over the past 27 years, he and his students have been and continue to fire their creations there at his studio.

Bachelor of Science in Fine Arts, 1968